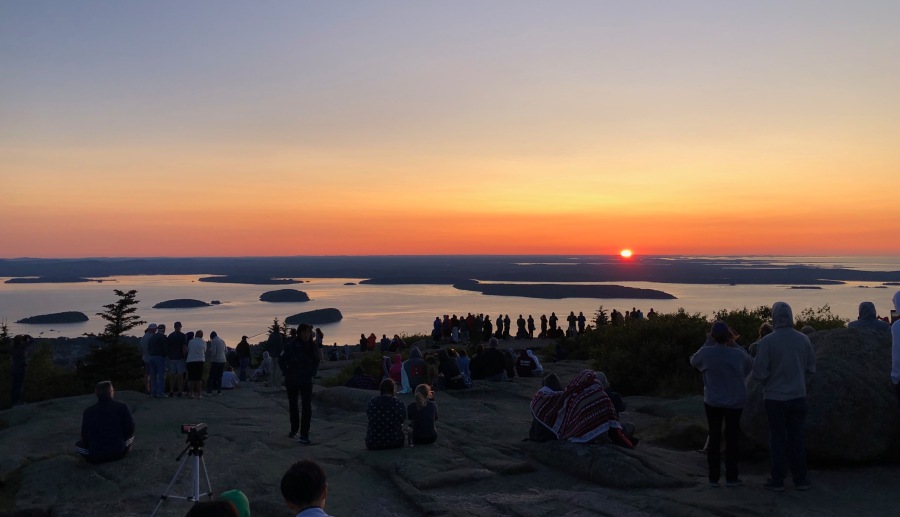 When Sarah announced (during our Summer 2018 vacation) that we’d be going to Maine for our Summer 2019 vacation, I probably responded with an unenthusiastic something along the lines of “I’m not ready to think about that” or “whatever you say”. Now that it’s come and gone I can say that I’m so glad she chose this spot, and that it was the perfect location for this summer.

The past few months have been quite hectic and trying at times. With two kids, especially with a rather fussy infant, it can feel like a challenge just to get through the basics of each day, never with enough sleep. That coupled with an extremely busy time at work, while I’m not normally the type of person to say “I need a vacation”, I found myself saying it quite often in the couple weeks leading up to it. Even while saying it, I knew this wouldn’t be a “vacation” in the sense that it wouldn’t be totally relaxing and care free. That’s really not what I was looking for, because we knew going into it with a 4 month and 3 year old in tow, that would not be possible (even if we were lucky enough to have my Mom, Dad and sister Ellie join us!) Instead, what I hoped, was that it would be an opportunity to have fun, enjoy my kids, see and do new things in a serene environment away from the daily checklists and duties that can be all consuming. I’m so happy to report that Maine delivered. 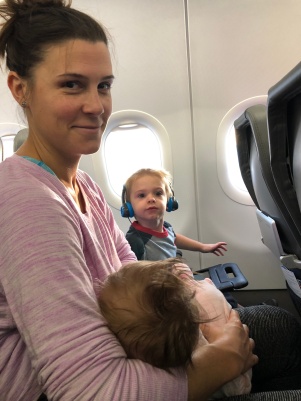 The flights both ways were a dream as far as flights with kids go – Della is young enough that she mostly slept and Harvey is finally old enough that he can entertain himself for the most part and sit still. The one time he did get a bit restless, Sarah pulled out her makeup bag and gave him a little makeover for entertainment. The green eyeshadow was his favorite! We had a 3 hour drive once we arrived in Maine from Portland to Bar Harbor. The kids slept, the scenery was lovely (including Fort Knox), we talked, listened to podcasts – it was great! Once we arrived in Bar Harbor and got acquainted with our Airbnb, we knew we had stumbled upon an amazing place to make memories and enjoy each other for the week ahead.

And that’s just what we did.  When we arrived, we had exactly one thing explicitly planned for the week – something very rare for any Cain vacation. This worked because everything was so close – definitely why this trip will be hard to beat. Bar Harbor, the primary town situation on Mount Desert Island, approximately half of which is Acadia National Park provided so much fun and entertainment within itself, but going to the park was just a short 5-10 minute drive away. And unlike other towns close to National Parks we’ve visited, Bar Harbor was not overtly touristy or corny. It was simply a beautiful quaint little town. 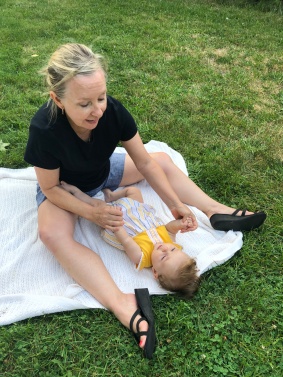 I won’t go through everything we did each day (some of our favorite activities are bulleted below), but I can’t speak enough to how great the trip was. There were young families everywhere, which both surprised us and made us feel right at home. I mentioned before how Della has been a bit of a challenging baby, but she really came into herself this week. For the most part, she was very smiley, easy to please, eager to move and curious about her surroundings! I felt more connected to her than I ever have so far in her life. We went during the busy time of year and were prepared to fight crowds, but were extremely pleased that the crowds were not near as bad as other national parks we’ve been to, and we never had an issue parking. We all felt like we did everything we wanted to do, but that we easily could have stayed another week and never been bored or run out of things to do. 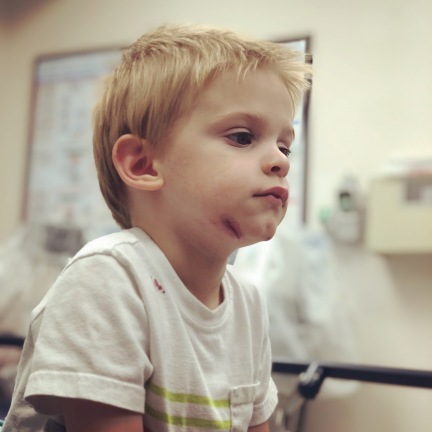 The only negative things about the trip I can think of are 1) Heat – Bar Harbor was experiencing a heat wave our first couple of days (highs in the low 80s), and being that air conditioning wasn’t a thing on the island it got a little hot, but we survived with fans. 2) Euchre – tempers flared, reneges happened, old grudges emerged, Dad got euchred on a loner – it got a little ugly! 3) ER – Harvey busted open his chin on the coffee table… yes I called 911, yes that was not necessary, yes I am very thankful Sarah is so good in those emergency situations! Fortunately we were staying a block from the one Emergency Room on the island, and they were able to glue Harvey up quickly. It was very gross and scary but we didn’t let it put a damper on the trip.

Growing up I had heard that my parents traveled to Bar Harbor Maine while she was freshly pregnant with me. I never thought much of it. With more years I notice my perspective on such things change and I can’t help but wonder about connection and meaning. This was my first trip to Maine, but a part of  what would be me had been there before, 34 years ago. Is that why I connected with the place so much? I wonder if Della will share such a connection with California – her first adventure last summer as just a little pea in her mom’s belly. It would be impossible to believe if it wasn’t staring me in the face each day, but now, merely a year later, here we are as a family of four on our first big adventure – on the complete opposite side of the country as last year. We’re a lucky bunch. 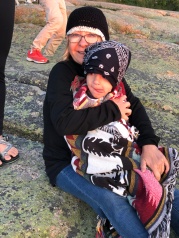 Cadillac Mountain. The high point of the island and you can either hike or drive to the top! We opted to drive (several times), the best being at dawn where we can say we were the first people in the United States to see the sunrise that morning.

Diver Ed. This was a one-of-a-kind amazing and unique trip where we went out on a boat, and a diver takes videos of sea creatures below and also brings some aboard for everyone to see and hold. It came highly recommended by the SODU posse and we saw why! Harvey was just old enough to get some enjoyment, but I would say 5-10 is probably the best age. We were about 15 minutes into the 2 hour trip when Della starting screaming… Sarah and I both looked at each other like uh oh, what were we thinking, because there was no escape on the boat. Fortunately, she fell asleep soon after and we were all able to relax and enjoy the trip!

Land Bride to Bar Island. At low tide a huge land bridge opens up where you can walk to what is an island during high tide. Was very cool!

Shore Path – A ½ Mile path along the coastline of Bar Harbor with spectacular views. Great for running or having a morning coffee stroll. 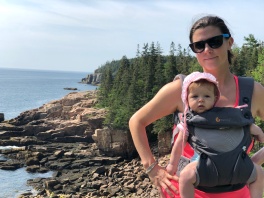 Ocean Shore Hike –  An out-and-back hike (4 miles total) that is one of the most popular in the park because of the gorgeous views. It started at Sand Beach and went to Otter Cliff. Since most of the beaches are rocky, Sand Beach was a rare spot where it was easy to go for a dip, but even in August, the water was way too cold for anything more than a quick jump-in.

Jordan Pond Loop – This was a beautiful 3 mile loop around a scenic pond. Probably my favorite hike of the trip. We even tried to make it up to the top of bubble mountain, but accidentally picked the most treacherous route and sadly had to turn around just shy of the summit as there was no way to make it carrying kids. Acadia has some INSANELY tough trails, so I would definitely recommend looking at the difficulty level prior to hiking.

Beech Mountain – A moderate 2 mile loop – great for hiking with kids. At the top is an old fire tower you can climb up if the ranger is there (which he was). We also discovered loads of wild blueberries on the trail, which contrary to what I would have thought, is totally allowed by the Park.

Eagle Lake Loop – This was a 6 mile loop on part of the carriage trail system the park is known for. There were definitely way more bikers than hikers on this trail. If you wander onto the hiking path closer to the water be prepared for some huge rocks and boulders to walk across – we discovered this the hard way!

Thurston’s Lobster Pound – This was 100% the food highlight of the trip. We saved for our last day, and it was worth the wait. In the town of Bernard on the “quiet side” of the island, here you pick out your lobster (alive), watch them throw it in a boiler, and then eat it just minutes later. We had a 3 pounds lobster and once I was fully convinced it wasn’t still moving, had an amazing adventure eating ever part of it we could.

Quiet Side Café – Probably our second favorite spot was also on the quite side, in Soutwest Harbor. We had lobster pizza, blueberry pie and blueberry ice cream. All unbelievably delicious.

Reel Pizza Cinerama – In downtown Bar Harbor, this place is a movie theater that also servers delicious pizza, beer and other food. Harvey and I went here for dinner the day of his accident to do something chill and saw The Lion King. I wasn’t prepared that this remake was line for the line the same as the original (a movie I watched during my youth probably 50 times on VHS), and to see Harvey so into it and singing the songs, (and perhaps the beer play a role) but I found myself welling up multiple times.

Side Street Café – This place had the best happy hour in Bar Harbor! Drafts were $3 off, so we actually hit this place up twice during our stay. Very kid friendly too!

Jordan House – This place has been open since the 1800s and was sort of an obligatory stop after hiking the Jordan Lake Trail. Food was good and the views of the Bubble Mountains were even better!

Allagash – Located in Portland, this was one of only a couple of Maine brewery’s we had heard of, so it was neat to visit in person. They didn’t serve any IPA’s so wasn’t my favorite, but the sour that tasted like gym socks was a hit with some of our group apparently.

Finback/Blaze – Sister restaurants serving Blaze beer, which we all really enjoyed, the Zip IPA being the favorite. If you go to Finback, get the fish and chips!

Bar Harbor Beerworks/One Off – Great spot with good beer! My mom even found one on her beer bucket list – Sip of Sunshine.

Jalapenos – Ellie who has a seafood aversion and was a serious sport all, just wanted to get some Mexican food for her birthday dinner. They had some good tasting margarita’s and my lobster quesadilla was quite good also!

This is super low quality, but we did a quick upload of some videos from the week! 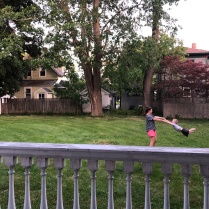 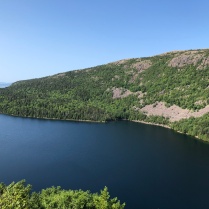 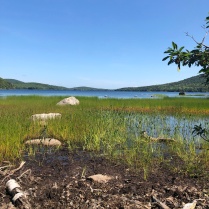